Stories from the National Family Mediation

You may or may not know people who have gone to  mediation.
The idea of a separating couple talking to a complete stranger might even seem daunting.  The National Family Mediation have shared some of the work they have done which shows how even in difficult situations, it is possible to achieve a resolution of some kind.

One July day, 39 year-old Jake moved out of the family home and into his new girlfriend’s flat.  Jake and his wife Lisa, 35, both acknowledged the relationship was over, but they argued about contact with the children. It escalated and their 7 year-old son and 5 year-old daughter, were clearly being affected.
Their son’s teacher had noticed he was being unusually disruptive at school, whilst their daughter was having difficulty sleeping at night.
Tom was keen to keep contact with the children, so he’d approached a solicitor and it was she who had suggested mediation at their local NFM service as a possible way ahead.
Although Lisa admitted that she had been sceptical about the idea of mediation at first, she and Jake agreed to try it as a means of breaking the deadlock.
Their mediator, Elaine, helped them to understand each other’s position and their children’s needs, and after three meetings they managed to arrive at an amicable solution, which meant the children were able to spend time with both mum and dad. Lisa and Jake also agreed to schedule a review of arrangements for six months later to see how things were going.
“The kids are more settled and happier now we aren’t at each other’s throats every time Jake rings” said Lisa.  “Elaine helped us to get on with making things work on a practical level. To some extent we had to put aside the angry feelings we had towards each other. This wasn’t easy, but we both felt that doing so would be best for the children.”
“We’re confident mediation helped us move things on in a way that wouldn’t have really been possible if we had just carried on fighting a battle against each other.”
This is a real case study from our trained mediators, though names have been changed to protect identities 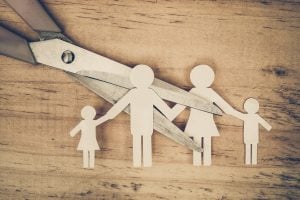 Omar was keen to move from supervised contact with his two children to unsupervised contact, but he said his ex, Lu, wouldn’t allow this.
There was also an issue about the former family home where Omar was still living, and he was concerned that Lu was demanding money and that he would be forced to sell up and become homeless.
Omar got in touch with his local NFM service and, after seeing a mediator, decided he wanted to mediation a go to resolve the contact and financial issues.
He was clearly very angry, but didn’t disclose any domestic violence issues to the mediator.
Lu wouldn’t respond to initial attempts to contact her but when the mediator wrote to say that Omar had seen a mediator, offering her the same opportunity, she made an appointment.
During that introductory meeting the mediator assessed for domestic violence and it emerged that she had left the family home following a series of acrimonious and physically violent arguments.
She was very nervous about mediation, but more so about the prospect of returning to court where she was worried the outcome would be one that she would find difficult to manage. With the mediator she discussed safeguards to make mediation possible: separate arrival, waiting and departure; perhaps starting with indirect mediation to see if things could progress; and being clear that she could stop at any time.
A first appointment was made with Lu and Omar in separate rooms with the mediator working between them. Lu arrived and left first so that she would feel safe.
During the meeting, agreement was reached about unsupervised contact arrangements – with detailed handover arrangements through a mutually acceptable third party who had offered assistance.
The root of Lu’s concern was not about the safety of the child but her own safety at handover. A further session was arranged with a four-week gap to give the clients time to try out the arrangements and to gather financial information.
When she arrived for the next session early, the mediator checked to see if she still wanted to continue with indirect mediation and she said ‘no’, she would like to try being in the same room, but still to wait separately.
At the start of the session the mediator brought the clients together and began by checking how contact had been working. Both were positive and keen to make a start on sorting out their finances so that they could both finally move on.
Financial disclosure was completed and the clients explained what they were looking to achieve. Omar was surprised: he had imagined Lu was looking to ‘take him to the cleaners’. They discussed some options and narrowed those down to one which they both preferred. They asked at the end of the meeting to find out some information, to check what was realistic and achievable, as well as to seek some legal advice. Lu again left first and was given time to clear the area before Omar followed suit.
At their final meeting they both remained in separate rooms until the session started. Both had gathered the relevant information and had taken legal advice. With some adjustment they were able to reach agreed proposals based on their preferred option which was then written up for Lu to take forward through her solicitor alongside their divorce.
In her feedback to the mediator after the case had been closed, Lu expressed her pleasant surprise that mediation had worked and particularly thanked the mediator for making her feel so safe.
This is a real case study from our trained mediators, though names have been changed to protect identities
Learn more about mediation here

For all the expert advice and support you need going through a divorce, sign up here today to join the Divorce Club
SHARE THIS