Olé! Why the Spanish don’t divorce

Why the divorce rates are lower in Spain: An British woman observes…

I have lived in Valencia, Spain for 5 years. I am a twice crowned divorcee myself and I must admit to being rather surprised at how few divorcees there seem to be here in Spain. According to the ‘Separation CA divorce facts 2012’ the percentage of divorces in Spain sits very low at only 15%. If you take this as a comparison to the UK, where the divorce rate is around 42% it does raise questions in my opinion. Why are there such few divorces in Spain?

The first clue I believe is down to religion. Around 98% of Spaniards are Catholic and not only claim to be Catholic, they practise the religion as well. A good example of how religious the Spanish are comes from my own personal experience. When I first moved to Spain my youngest son was 6 years old. I enrolled him into the local primary school where he was the only English child. Religion was a compulsory subject in his education, but, after a chat with his school they said my son could be excluded as he was not Catholic. So far, so good, until my son became 7. Around the age of 7 Catholic children take communion and it’s a big deal. I’m talking presents, a church service, new outfits and a big party. My son, from a class of 22 students, was the only one not to take communion. In fact, from what I have since observed he is probably the only child in the entire school who did not take communion. As a non-follower of any religion other than a belief in myself I do find it hard to imagine that a faith can prevent a person from doing what makes them happy, but divorce is still frowned upon within the Catholic faith, despite a change in the law towards divorce that came into practise in 2007. Could it be that couples stay together as they believe divorce is bad in the eyes of God? 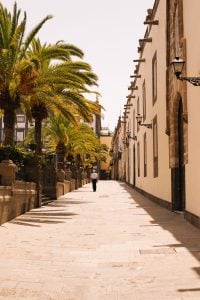 My next conclusion comes from spending lots of time with Spanish women and getting to understand their perspectives on family, marriage and children. Nearly all my Spanish friends are stay at home Mums. Don’t get me wrong, I’m not saying this is a bad thing at all, but in comparison to all my UK friends, married or divorced, most of them seem to work and have careers. It seems that the general census here is you get married, have children then stay at home to look after your family. This led me to question if Spanish women stay married because they have no independence as such. There are no such things as family credits, housing support or single parent benefit here in Spain and if a woman has no job then she will have no money. Even if she wanted to leave her husband, how would she support herself? Perhaps a husband would feel a huge sense of financial responsibility to his wife and couldn’t leave her even if he wanted to.  I wonder if some of my Spanish friends had careers and their own money if they would still be married. Most of them do seem genuinely happy but I often question if this would be the case if they went to work, had independence and a life away from the family. I personally think that you can’t miss what you have never had and if all you know is ‘keeping house’ then maybe one would settle with the life they had and not keep searching for the end of the rainbow as many of us English women seem to do.

I believe that leading independent lives out with our partner could be one of the reasons there are more divorces in the UK. Let’s be blunt here. If you are spending lots of time with other people at work, going to the pub with friends and seeing your single friends have so much freedom and choice of partners it does impact upon you. I know it did me. I hate to use clichés but that old adage of the grass is always greener pops into my head. If you imagine that you hadn’t really experienced going out to work, nights out on the town or had an opportunity to meet lots of different and interesting people while you were married would things be different for you now? I’m not saying that Spanish women don’t have a good quality of life because they don’t do these things and I’m not saying that we all got divorced because we had jobs, but it has to be said that women with independence seem more likely to leave their partner than a Spanish woman who has very little. Only my Spanish friends can say if they are truly happy with their life and answer if they could financially support themselves would they leave their husband.

My final sense of reasoning as to why divorce rates are lower in Spain comes from the Spanish beliefs in family values and traditions. That might seem a strange thing to say as we all have a sense of family values but it is different here in Spain. Children are brought up differently here than an English child is brought up. For example, all Children will go out with their parents for a meal to a restaurant. Very often you will see a big family get together with adults and children all sat at the table.  It’s very unusual for a married couple with children to go out on their own. Children are welcome in all the bars and restaurants unlike in the UK. Obviously they are not allowed into clubs but as mentioned before most married people are not in the clubs anyway. Spanish children are also very respectful of their elders. As they are integrated into adult company from a young age they are taught how to behave by many family members, not just the parents. It is very common for a few generations of families to live together in the same house as well and the Grandparents tend to have the control too. At weekends all the family get together to eat or go out as a group, even the teenagers!  Boys are also very courteous towards girls and it’s a followed tradition that a boy will ask the parents of a girl he likes if he can take her out on a date. I was so shocked when I first heard that still happens here in this day and age, it seems so old fashioned to me, but maybe those sense of values and the respect given to others is why many couples stay married here in Spain. Maybe we have become selfish over time in the UK and think too much of our own happiness.  If children are brought up to be so respectful to others and to listen to their elders they develop into kind and considerate adults who then make kind and considerate partners.

There are probably other contributing factors as well and of course this is just my perspective on it but as long as the marriage is a happy one and both partners are content and fulfilled then long may they stay together and continue to keep the divorce rates down.

What are your thoughts?  Full of stereotypes or full of truth? – We want to know what you think so please comment below.